When the facts change, I change my mind.  What do you do, sir?

Yet it would not be unconstitutional, nor a bad idea, to seek careful legislative clarification to  the 14th Amendment. Read it. There is clearly room to ask whether automatic citizenship should be granted to all children born to any non-citizen who merely happens to be in the US at time of birth.

And interpretation can change with needs.  When the 14th Amendment was ratified 150 years ago, the US was a vast empty continent, with 30% fewer people than California alone today.  Nearly all jobs were unskilled or semi-skilled.  Reaching America from other countries was slow and expensive, limiting the rate of flow.  It was logical, under those circumstances, to have a loose and expansive definition of citizenship.

It is not “closing the door behind you” to recognize that conditions change.  Today, the US is the world’s third-largest country by population.  We don’t obviously need more people with the urgency of a century ago.  Where we do need more, we need only skilled people.

“Birthright” citizenship makes no distinction between skilled and unskilled.  It is probably the biggest single incentive for unskilled illegal immigration, so it makes sense at least to re-examine what we are doing at this margin.  Instead, we get blind xenophobia on the right, and blind opposition to new limits from a left that has forgotten its labor roots.

Let’s stipulate that nearly all immigrants are hardworking, honest and deserving.  That alone is not sufficient reason to allow undocumented immigration.  The US needs more skills, not more bodies.  We are already oversupplied with underskilled US citizens.  We lack effective systems to retrain them.  The more unskilled workers that come into the country, the greater this imbalance becomes.

It can be hard for coastal elites (like myself) and Baby Boomers to grasp, but America’s resources are not infinite.  Since we cannot help everyone in the world, we must prioritize who we help.  We owe our greatest responsibility to our own current citizenry.

Thus it makes sense to question, within constitutional limits, the incentives that attract unskilled workers here outside the rule of law.

As the world grows wealthier, births by Caesarian section are growing common. 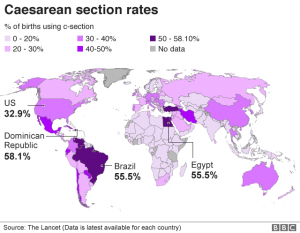 This sends human evolution in a new direction.

Obviously the human species is optimized for intelligence.  That is its competitive advantage.  Intelligence requires brain capacity, which requires a big head.  The correlation is not perfect, but a strong predictor of an adult’s intelligence is head size at birth.

The evolutionary advantage of large head size is implicit in the high death rates that prevailed in childbirth before modern medicine.  Big heads were so competitively valuable that they were worth a material risk of the mother dying on every single birth.

With widespread C-sections, that risk is no longer material, and human head size is now unbounded.  If high intelligence is still reproductively valuable (I don’t know the answer to that), then we should now expect human heads to grow larger and larger.

If that happens, then we also take on a new civilizational instability.  If humans adapt to produce babies that do not fit through the birth canal, and if C-sections for some reason became unavailable for a period of decades…